THE STORY SO FAR

Zooming around Essex and beyond!

Writtle Singers, like many other choirs, has continued to ‘meet’ online since the beginning of lockdown in March 2020. Over a year on, as well as continuing to explore new repertoire and keep our voices and skills in trim, we’ve held several open sessions as well as an excellent, if highly unusual, vocal training session with Ghislaine Morgan. We are very much hoping to able to sing together again before long.

The thoughts below reflect quite an early stage in this strange, and now rather long, journey online!

We all had to become familiar with the Zoom platform, and the few who were initially unable to join in were helped to do so by kind fellow members.

It has been wonderful to see everyone on the screen from week to week – even if those of us with smartphones could only see four images at once.

What luxury for some:  twenty five pictures at a glance! 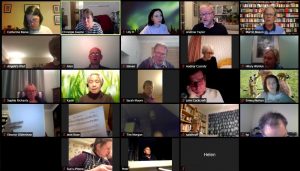 But . . . seeing our friends and fellow singers is one thing; hearing them is another issue altogether. There is a small time delay between hearing someone else’s sound and being able to respond, and it quickly becomes apparent that if we try to sing or play together the result is just an awful noise. . . so the system of rehearsing had to adapt: the MD (now re-designated the Zoom meeting host J) constantly reminding us to ‘Mute’ (that’s a big change in itself!) and playing the voice parts on piano, one at a time or in various combinations, for us to sing along with – although of course we could not hear anyone else. The alternative was to show a You Tube video of someone else’s recording, complete with their MD’s idiosyncrasies of tempo and pronunciation. We discovered some very interesting performances, and not always in a good way!

Before the Zoom period we had been preparing for our Spring concert on 4 April: “Made in Essex – music written in and around Essex, from Byrd and Tallis to contemporary settings of folksong, Shakespeare and some crazy poems about our very own county!”

In the hope that we might be able to postpone this concert until later in the year, we continued to keep the music fresh in our minds from week to week whilst also learning some ‘new’ pieces by Elgar, Quilter, Stanford and Schütz amongst others. It wasn’t the same as singing all together and being able to hear and blend with each other,  but still useful.

It was perhaps surprising to find that working in this new way took quite a lot of concentration, and we soon introduced a new feature to give us a short respite: each week a different choir member talked about a favourite piece of music which was special to them and we then listened to a recording – usually a motet, a part song, or an excerpt from a larger work.

Despite all the technical challenges in these last few months, we’ve managed to explore and learn some beautiful – and unusual – repertoire, to get to know each other a little more and to delight in one another’s pets and gardens through the wondrous medium of Zoom.  It now looks quite likely that we will continue to be limited to rehearsing remotely at least for the early part of September, but who knows?

Feedback from a guest at our end-of-term session:

“Thank you for having me. A delightful repertoire. It’s so nice to still be discovering gems (especially British ones.) Really appreciated Christine’s skilful chairing and lovely to see people’s gardens.”

Feedback from members who have participated in our online sessions:

“Virtual choir has been a constant in a weird time over the last few months.”

“. . . My thanks too for everyone contributing during this and keeping going. It’s been difficult for everyone I’m sure with family commitments as well as work and to keep going with this has been marvellous.”

Click here to buy tickets for our next concert

When you  buy from Amazon. Click here before you go to the Check Out to pay.

Click here to see what’s in your shopping basket Music for voices from Tallis to Elgar, available priced £7 + p&p.

This website uses cookies to improve your experience while you navigate through the website. Out of these, the cookies that are categorized as necessary are stored on your browser as they are essential for the working of basic functionalities of the website. We also use third-party cookies that help us analyze and understand how you use this website. These cookies will be stored in your browser only with your consent. You also have the option to opt-out of these cookies. But opting out of some of these cookies may affect your browsing experience.
Necessary Always Enabled
Necessary cookies are absolutely essential for the website to function properly. This category only includes cookies that ensures basic functionalities and security features of the website. These cookies do not store any personal information.
Non-necessary
Any cookies that may not be particularly necessary for the website to function and is used specifically to collect user personal data via analytics, ads, other embedded contents are termed as non-necessary cookies. It is mandatory to procure user consent prior to running these cookies on your website.
SAVE & ACCEPT
Social Share Buttons and Icons powered by Ultimatelysocial